To celebrate Mother's Day (and my birthday) I would like to offer a 25% discount to anyone who signs with me for doula services in the month of May.

May has always been what I consider "My Happy Month" so I want to share my happiness with all of you!

No matter when your due month is, if you sign and return the contract and pay the deposit in May, I will give you a 25% discount on my doula services. This is quite the deal since they are already heftily discounted!

All you need to do is print this page, and present it to me at our free consultation. 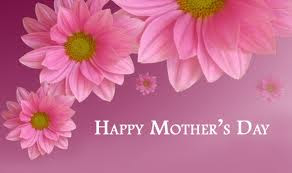 Posted by Kristi at 6:14 PM No comments:

I'm doing an experiment today. Will you join me? I've decided to replace every negative thought that enters my head with a positive thought. Every single thought no matter what it is. Even if it's about your appearance, your money problems, your self-esteem, your relationship. Your pregnancy. Your birth. Let's replace any negative thought and turn it into a positive one today.

Instead of, "We have no money. There's no hope that things will ever get better," say, "We are making it and things will get better."

Instead of, "My belly looks so huge and fat," say, "My belly is amazing! It is nourishing my sweet baby and means she is growing."

Instead of, "I am scared to give birth," say, "I am looking forward to giving birth, and it will be a joyous and wonderful experience."

Instead of, "I am too weak to handle the pain," say, "I am strong and capable! I can overcome anything!"

After going with my husband to pick up some of his clothes from the seamstress, I read yet another article telling me to "think positively." I'll admit that I am not the best at this. When things are not going very well, how in the world is positive thinking supposed to change that? I'll admit I haven't really been a believer.

But it's everywhere! And I've decided to experiment.

Because you know why? There are a few things that I do think positively about. One is birth. Birth is amazing. I had such a wonderfully good and positive attitude about my birth, and you know what happened? I had a great birth!

And the day that I decided to play my flute in recital hour and walk out like I thought I was the stuff, everyone came up to me afterward and told me I played the best they'd ever heard me play. I didn't really play any better than usual; I just had a way better stage presence and attitude.

So back to the article yesterday. (It was in an actual magazine and not a blog post. Imagine that!) I decided this morning that I was going to commit to this experiment. I'm going to replace my negative thoughts with positive ones and I don't even have to believe the positive ones. All I have to do is think positive thoughts. And you want to know something funny? I suppose just by virtue of saying, "Hey, guess what Negative Thoughts, if you come into my brain today you're getting banished," they've decided to stay away. I think the fact that I'm not trying to not have any negative thoughts, but instead making myself just rephrase the negative thoughts in a positive way, is really helping. I find myself frustrated when I try to just think positively.

So for today only, I'm doing this experiment. And if it goes well, and it has so far, I will try it again tomorrow. And the next day. And the next. If there's one thing I'm good at, it's practicing. I'm going to practice positive thinking for awhile and see how it goes. Try it for yourself and be sure to let me know how it goes!

I have never been interested in celebrity news, and I don't really intend to start even after I write this blog post. I know you will never see this, but I feel prompted to write it anyway.

I wasn't paying very much attention to your pregnancy until a few of my friends made comments about how much weight you've gained. I'm not sure that they understood that you're pregnant. You're gorgeous! You look beautiful with your long hair and blooming belly. I hope you feel beautiful.

I didn't pay attention again until a few days ago when several of my friends posted articles that said that you were opting for a Cesarean section because you were afraid of the pain of giving birth. Not only did they post articles, but their comments were generally unfavorable. This made me sad.

I've read only one short article about what is supposed to capture all the fears that you have tried to overcome and the efforts and emotions you have put into preparing for the birth of your baby.Yes, fear is something that you need to try to work on, but I'll tell you something. I was still afraid of something when I went into labor. I'm not sure what I was afraid of, but when my first contractions hit, I was scared I wouldn't be able to make it 12-14 hours with contractions like that. But something happened during labor. Something happens to many women all over the world during labor. There's a place we go where we somehow find the strength and courage to make it through. But it's even deeper than that. It's a place beyond thought. It's a place where you just surrender to the process and no longer need to think about what to do. Your body just does it for you. And if feels so good to have your husband, partner, or chosen loved one to be there with you to hold you, to massage you, to just love you. (By the way my birth didn't end up being 12-14 hours. It was much quicker than that.)

You are just as capable as I am, and just as capable as all healthy women are. I wish you would give yourself more credit. I wish that fear of pain wasn't your reason for choosing a Cesarean because that is something that you can work through. Even still.

No matter what you decide for your birth (you still have time to change your mind again), I hope you hire a doula. Having a doula there with you can make a world of difference. A doula can help Eric support you even better if you want him to be the main support. She may be able to say just the right things to help you have the confidence you need to birth your baby the way you originally wanted. It's not too late until your baby is in your arms, and even then, she can help you start your breastfeeding journey if needed.

And no matter what kind of birth you choose, I hope this experience transforms you for the better. I hope you find out just how strong you are! I hope this is a joyful experience for you, and I hope you sing this baby into the world as the two of you work together to welcome your little bundle Earth side.

Kristi
Posted by Kristi at 9:10 AM No comments:

I was able to attend the Spinning Babies workshop that came to Houston a few months ago. I am so thankful for my friend and fellow doula Jessica for helping me out financially to be able to attend this workshop. She is a gem in the doula community and I am so thankful to have her as a sort of mentor when I need help or have questions. I reached out to several doulas when I first started out and she was the first, and only for awhile, to reach back to me. I really appreciate her. She also ran my first 5K with me, but that's another story for another day.

Unfortunately, I accidentally deleted half of the pictures I wanted to share from my phone. Because there is no way to recover them, I will have to update this post little by little when pictures trickle in. I've waited long enough to share the pictures I have, so without further ado, here are a few of my Spinning Babies pictures. 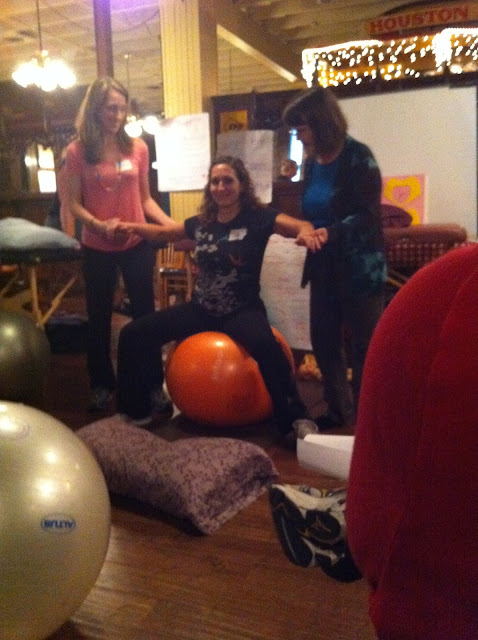 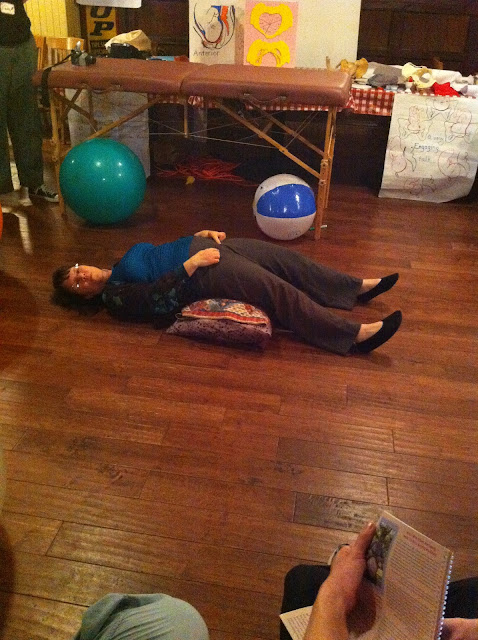 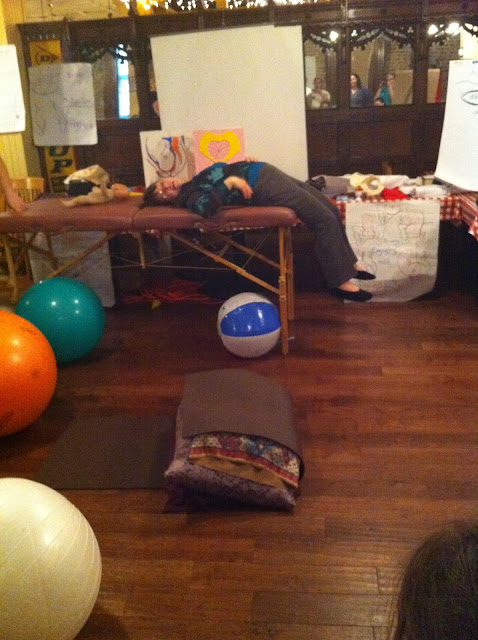 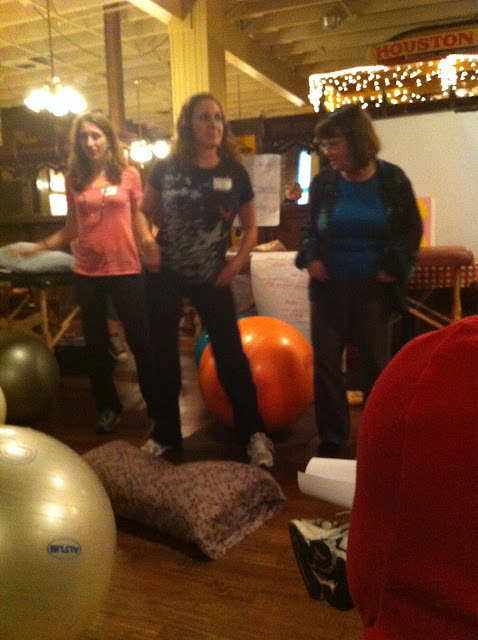 Stephanie, Cole and Gail are wiggling those hips!
The same moves that got the baby in help get the baby out. :o) 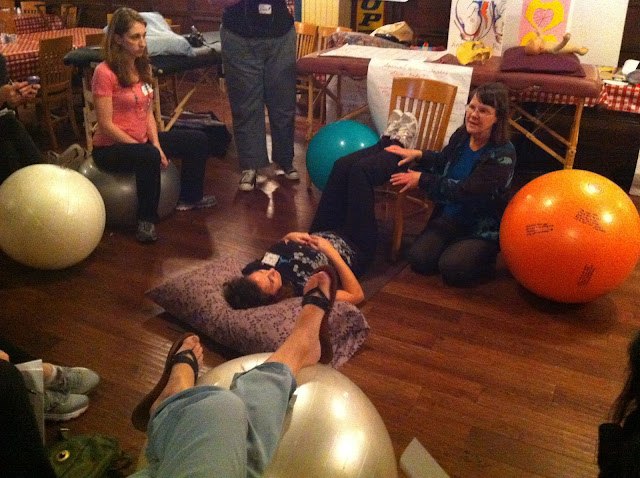 I really love this last picture because what do you see when you get a bunch of doulas together? Lots of big ole balls! Ha ha ha! I couldn't resist. Sometimes I have an inappropriate sense of humor. I'm sure you can find t-shirts that tease about birth balls on CafePress. Lo and behold you can! And look! Bumper stickers!

Too bad I wasn't the one to come up with this.
I am still a little sad that the rest of my pictures are deleted, never to be found again. Hopefully, after sending a plea to some of my doula friends, I will be able to add more after they send me a few. I am so glad I was able to attend this workshop and I feel like a better doula for it.
Posted by Kristi at 3:58 PM No comments:

I've been wanting to crochet a boobie hat for a long time but have never gotten around to it. I finally decided to try it out, and voila! Here it is! 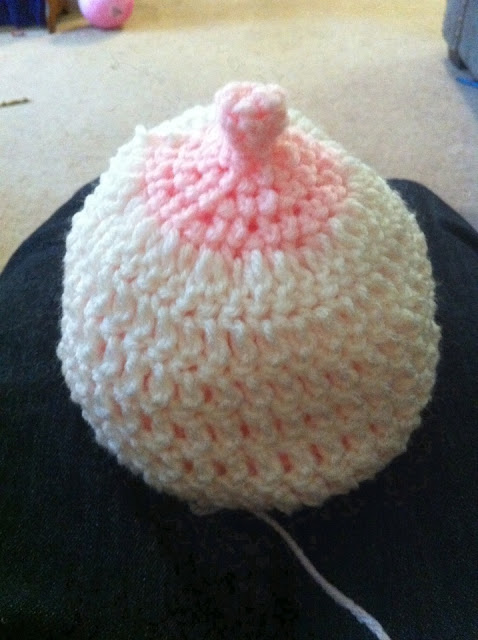 All my clients who want one can have one included in their postpartum goody bags. Just let me know and I'll make you one! Yay!
Posted by Kristi at 12:39 PM 1 comment: 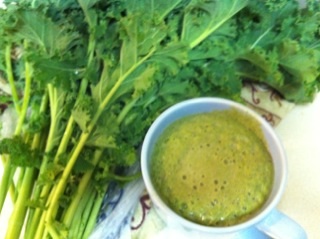 Yesterday I attended the second class of the Hypnobabies class I am auditing. This was the nutrition portion of the course, and we talked A LOT about healthy nutrition during pregnancy. One of the easiest ways to get tons of nutrients in one pop is to drink GREEN SMOOTHIES. I know it may not sound so great, but I have finally decided to start the green smoothie journey myself. When I first started looking for recipes, I felt overwhelmed by all of the combinations out there. I decided to just experiment with what I had, and voila! I have just a few recipes that my entire family enjoys. Yes, even my almost two year old loves them.

This one is the all-time favorite of my entire family.


I have more recipes here, and I update this page pretty often. Be warned. I am on a journey and I am experimenting. Some of these are gross. :o)

Good luck on YOUR green smoothie journey!!!!
Posted by Kristi at 2:35 PM 1 comment: