This is a long overdue post, and has been in the pipeline of blog posts for months. I am happy to share a beautiful midwife-assisted natural hospital birth.

8 Red Flags that tell you that you need to run far, far away from your OB

As a doula, I feel it is important to be familiar with the birthing climate in the Houston area. I consider it a privilege to get to know and become friends with other birth workers. I enjoy attending births all around the greater Houston area. I love to attend the occasional hospital tour to get a feel for what to expect at a hospital at which I've never joined a family for their special day. I also like to read the websites of various health care providers and hospitals, especially when they so generously provide a detailed Frequently Asked Questions section. However, every now and then I want to take a big red marker and say, "No! No! No! Red flag! Red flag! Run far, far away!" The following is a list of just a few red flags that I have collected after reading several provider websites. And because I am a fan of silly memes sometimes, you get to enjoy my silly sense of humor.

Red Flag #1: Your doctor (or midwife) does not recommend birth plans. 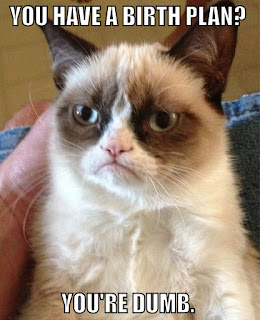 By now, we all know that birth PLAN is probably not the best name for what a birth plan actually is. Everyone knows that birth does not always go according to plan. It is pretty unpredictable. It's exciting, thrilling, awe-inspiring and sometimes annoying, scary and heartbreaking that way. Sometimes a natural birthing mama ends up with a Cesarean because her blood pressure went through the roof at the end of her pregnancy, or a mama looking forward to her relaxing epidural birth ended up with a super fast natural birth. There is plenty that goes against the best and most carefully considered plans. There is plenty out of our control. However, there is plenty that is NOT out of our control, such as birth location, care provider, whether or not we accept or decline an induction, whether we accept or decline the epidural when that nurse in triage asks you if you want one when your husband and midwife left the room for that split second, what you wear during labor, etc. There is more that SHOULD be in your control, but often is not due to reasons such as hospital policies, such as position during pushing, eating and drinking during labor, laboring in water, etc. If a provider scoffs at your desires to have a birth plan, or makes fun, or tells you that you do not need one, that's a red flag. There are plenty of providers in Houston that do not mind them and actually encourage them. 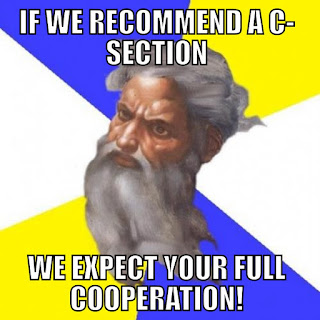 If your doctor (or midwife) recommends an intervention, and you are made to feel like you are not allowed to decline, that's a red flag. Ask questions about why the doctor is recommending an intervention (such as induction, Cesarean, etc) and gauge the reaction. How is the doctor treating you because you've asked questions? Do you feel rushed? Stupid? Safe? Excited? Scared? Like just another number? If your doctor seems annoyed that you are asking questions, let that be a red flag. If your doctor says on her website, "if we recommend XYZ, we EXPECT YOUR FULL COOPERATION," let that be a red flag. The first time I came across a website that said that, I was completely floored.

VBAC (Vaginal Birth after Cesarean) is sort of a huge deal these days. Many many MANY women are seeking VBAC and many women are getting them! How is that possible? Because they are finding VBAC supportive doctors and midwives! (Or are forgoing the whole care provider thing all together) If they don't give the option of VBAC, what other options are not available? If you are seeking a VBAC, there ARE options available in Houston. Just not with everyone.

Red Flag #4: Your doctor (or midwife) uses scare tactics to try to persuade you to choose her recommendation.

Read about ACOG's recommendations on VBAC. 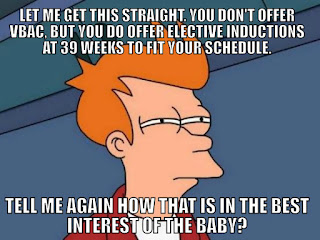 Ok, I'll concede a little one this one. Sometimes it might be a good idea to induce at 41 weeks IF, big ole fat IF, baby and/or mom are not doing well and the benefits of induction outweigh the risks. But to just recommend it (remember, there are some practices out there that say once they recommend something, they EXPECT YOUR FULL COOPERATION), "just cuz" does not sit well with me.

Red Flag #6: Your provider recommends that you get induced to fit their schedule.

Of course, you are allowed to schedule an induction to fit your schedule. It's your life, your baby, and your body. If the risks are worth it to you, by all means, do it. But it is NOT ok to be pressured into an induction because it fits into your doctor's schedule. Because you know why? Besides the fact that doctors usually only come in once the birth is imminent, meaning you're pushing and baby is coming soon, someone WILL be there to catch the baby. Why change your life around to fit such a short amount of your doctor's time. Why increase the risk of fetal distress, jaundice, c-section, etc to convenience your doctor?

Red Flag #7: Doulas are not allowed. 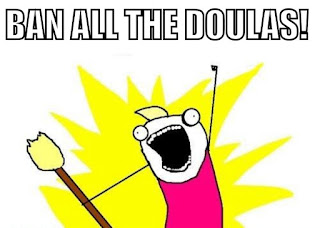 I'm sure you've seen that famous misspelled sign. You know the one. Ask your doctor how s/he feels about doulas. If s/he says they are not allowed, or that they had a bad experience with doulas (which may actually be true, but not all doulas are created equally), if they don't want you to have whomever you want at your birth, like they are going to be there the whole time like a doula would anyway, let that be a red flag. When I was pregnant, I had a midwife tell me that doulas are a luxury and that I wouldn't need one. That was a red flag for me. A tiny one, but a red flag nonetheless. Of course, I like doulas. I AM a doula. I think every woman should have a doula if she wants one.

Red Flag #8: You feel like you need to run far, far away, and as quickly as you can, from your OB (or midwife).

If at any point you feel like you should switch providers, you should probably switch. It may be really hard sometimes because most of the time they are sweet, caring and truly do want to help you. Not all OBs are like the ones that make you say, "Huh? How in the world did you get in this business?" But those instincts are there for a reason. If it doesn't feel quite right that a certain person, whether it is an OB, midwife, doula, mother, mother-in-law, sister, best friend, photographer, or even your other children, attends your birth, then they probably should not be there.

Every now and then, you'll get a red flag with even the most cooperative care provider. One red flag doesn't necessarily mean to run. Two, three or even thirty-three red flags doesn't mean you've picked the wrong care provider if you still feel certain that you've picked one you can trust. But if you start seeing these red flags occur, if you start feeling like maybe you don't trust this person, that maybe they don't really care about you, in short, if you feel like Number 8, then it may be time to interview some other providers.

I have a list waiting for you if you need it.

Posted by Kristi at 7:59 PM No comments: